Human made structures such as the Great Wall, Machu Picchu, the Colosseum, the Great Pyramid, and many others around the world that have lasted through the ages, inspire awe because of their scale, purpose, design, and history. These feats of human imagination and ambition also elicit another kind of awe – of the human cost in building them.

by long and complicated histories – the way cultures and societies are shaped by different influences and adapt to changing and challenging circumstances; how the rise and fall of different leaders can set a society on a particular path. Many great historical monuments are embodiments of the contradictions of long-fallen cultures, empires and societies.

Travelling provides an opportunity to see these historical relics. On a trip to China I was excited to be able to see so much of its history – the Terracotta Warriors, the Forbidden City, and the Great Wall. I was awestruck walking along the Great Wall and marvelled at its size, construction, age and history.  I was also amazed when I was in Peru, hiking along the Inca Trail to Machu Picchu, wondering how the Incas built a whole city on the difficult terrain of the Andes.

What I find fascinating are not just the monuments, but how they were made and who made them – not just the person or people who ordered or designed th

e construction, but the individuals who used their bare hands and bodies to physically build them. The histories and stories of the people behind these structures are just as important and interesting, but are often overshadowed. Yet it is not possible to fully appreciate these feats without knowing and understanding how they came to be. These magnificent historical monuments are testaments to past civilisations and empires. They are also symbolic of the ambition and bloodiness which built not only them, but also the civilisations and empires that produced them. They represent both the best and worst in human imagination and ambition. 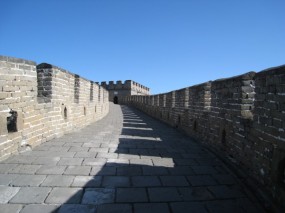 one, blood and bone are mixed together, bound by history. These monuments are both awesome and awful. They are awesome because of the inspiration, imagination, ambition and skill involved in creating them in times when building structures of such scale presented enormous obstacles, especially as the technology was rudimentary. They are awful because they were built on the backs and labour of so many people, whose bodies were cheap and lives cheaper.

A sense of awe washes over when visiting and seeing these remarkable historical achievements. There is also a feeling of eeriness and humility in knowing the human cost these grandiose structures demanded and exacted. The feeling of awe does not diminish with this knowledge, nor do the monuments become any less magnificent. However, a sense of the macabre is added to the mix, unsettling and confusing the earnest desire for pure admiration and wonder. Reconciling these contradictory feelings demands a deeper respect for the bodies broken and the lives lost in building these structures that still stand today, continuing to dominate their surrounds and refusing to bow to the whims of time.

This entry was posted on Friday 30 August, 2013 by Pooja Chowdhary. It was filed under Comment and was tagged with culture, history, labour, power, society, travel.